Halloween in the Crescent City

Consider spending Halloween New Orleans, the city that never sleeps!👻 Halloween in the Crescent City calls for two things: a lot of fun and a lot of frights! We’ve got everything from haunted houses and ghost tours to spooky sights. Here’s how you can celebrate this October. 🎃 * TAKE A HAUNTED HISTORY OR GHOST …

MSC Magnifica to Cruise in Northern Europe This Winter

The post MSC Magnifica to Cruise in Northern Europe This Winter appeared first on EatSleepCruise.com.

The Best Hotels In Rovaniemi, Finland For Families

Visit Corning NY: Things to Do, restaurants and hotels

The Finger Lakes region is a lovely drive from New York City. There is so…

The post Visit Corning NY: Things to Do, Restaurants to Enjoy, and Where to Stay appeared first on Sometimes Home: Couples Travel.

Dwarka is one of the famous pilgrimage sites in India situated at the western part of Kathiawar peninsula in Gujarat. According to local mythology, the city was strongly associated with Krishna. According to legend, Krishna after leaving Mathura set up his capital here. The city is famous for its beautiful Gujarati artifacts which tourists can buy from the nearby markets.

Dwarka is well connected to all the major cities via a dense network of roads. The railway station in Dwarka connects to various cities like Jamnagar, Mumbai, Rajkot, Ahmedabad and several more. Tourists can visit this place throughout the year. However, the best time to visit Dwarka is during the celebration of Janmashtami.

Considered as one of the sacred cities of India, Dwarka is one of the four char dhams in India, being a pilgrimage destination for devotees and home to the colorful Krishna Janmashtami festival, as it is believed that here was located the first kingdom of Krishna. Around it white houses hugged by the mysticism of gods still seem to whistle among its streets. 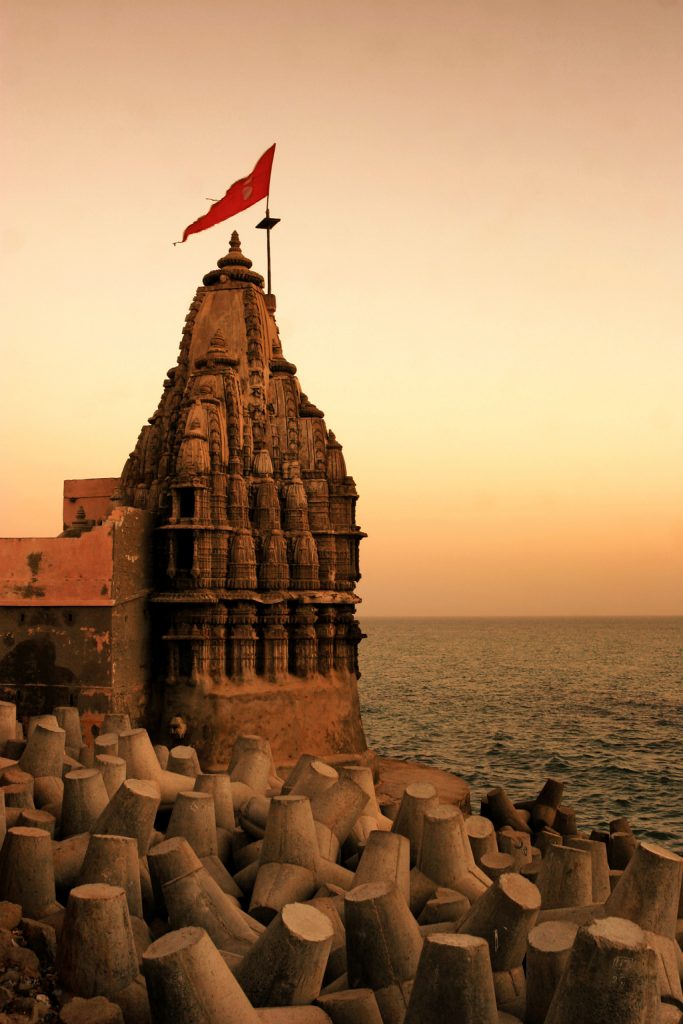 Here are some places to visit in Dwarka in Gujarat for a cultural experience.

One can visit the lighthouse which is one of the best places to visit in Dwarka to enjoy the panoramic view of the surroundings.

The Geeta Mandir is a marvellous temple located in the western part of the city. The temple's main purpose is to spread the principles of the sacred book, Bhagavad Gita. The temple is completely made of marbles. It was built by the Birlas in 1970. The walls and ceilings of the temple are full of carvings of hymns of Bhagavad Gita. Every word spoken out inside the temple echoes a lot which gives a strange feeling to the visitors.

Other places to visit in Dwarka besides the holy temples are the relaxing beaches. The charming beaches make one forget all his tensions and is the best place to take a break from the busy city life.

Another important temple is the Shree Dwarkadhish Temple. A monumental complex in the epic mouth of the Gomti River is famous for the presence of temples such as the Dwarkadhish, built 2200 years ago. The main temple of the region is Dwarkanath in honor of Krishna with 60 columns supporting the tall five storied building. There used to be 5 cities here which are now submerged under water.

The most famous Janmashtami festival is commemorated at this temple with complete enthusiasm. Devotees from all over the country come to worship Krishna on this auspicious occasion. The fest generally takes place in August or September.

The 2,500 years old temple of Dwarkadhish, also known as Jagat Mandir, is built on the north bank of the Gomti Creek. Said to be constructed by Vajranabha, the great-grandson of Krishna, the temple is made of limestone and sand. Sixty columns support the roof of the audience hall of the Jagat Mandir.

The main temple is five-storey high with the lavish carving of a 157 feet high conical spire. In the sanctum sanctorum, the one-meter tall, four handed black idol of Dwarakadheesh resides in its full glory. The temple has two doors. The north door is the Moksha Dwara and the south one, Swarga Dwara, leads to Gomti River. Apart from Krishna, there are a number of other deities also gracing the Dwarkadhish Temple.

One of the important Moksh Dhams of India, thousands of pilgrims throng at Dwarkadheesh Temple each year in their quest for Nirvana. So be sure to put the temple as one of your places to visit in Dwarka.

In addition of being famous pilgrimage destination, Dwarka surprises nature and beach lovers with its spectacular stretch of beaches. The Beyt Dwarka Beach is one such beach, located about 30 kilometers from Dwarka and 148 kilometers away from Jamnagar. Tourists love to enjoy the ferry ride from Okha to the Island of Bet. The island is famous for its modern temples.

The Beyt Dwarka Beach's name came from Bet Island, famous for its white coloured sand and its beautiful coral reefs. The Island is also rich in marine organisms. During the low tides it is common to encounter the amazing sight of dolphins leaping out in the distant sea. Porpoise, sea turtles, octopus, starfish, sea urchins are some of the other inhabitants of these islands.

A variety of water birds add to the charm of the beach apart from some migratory birds which flock to the island every year. The temples near Beyt Dwarka beach is a perfect mix of spirituality, nature and fauna, pleasantly surprising travellers for what it has to offer.

Situated in the outskirts of Dwaraka, Nageshwar Temple or Nagnath Temple is one of the 12 Jyotirlingas of India. According to Shiv Purana, Shiva started to reside in this temple in the form of Jyotirlinga after killing the demon by name Daruka thus signifying the removal of evil from the face of the earth.

This holy site can be visited as a part of your Nageshwar Dwarka Somnath Jyotirling Yatra which will guarantee an extremely spiritual experience. The Shivalinga in this temple is unique as it faces towards the south and the Gomugam is on the east. According to a legend, people threw a devotee by the name Namdev out of the temple when he refused to move from the front of Shiva Idol.

To the astonishment of devotees, The Linga faced South with the Gomugam facing east from then. On the eve of Shivaratri, the temple witnesses huge a turnout of devotees which transform the entire temple complex into a melange of festivities. The imposing giant statue of Shiva inspires awe as well as devotion.

At the rear of Dwarkadhish temple, flows the sacred Gomti River, on the banks of which, there are many revered temples, where pilgrims have been offering prayers since ages. Apart from a Shiva temple there are also shrines of Rama, Krishna and Sudama around the Ghat.

Among places to visit in Dwarka, there is a place with five wells called Panchanand Tirtha which is believed to have been built by the Pandavas.

You'll see devotees feeding fish here as a way to get wealth and prosperity. You can hire a boat to move across the river for a panoramic view of Dwarka.

Contributed article. If you choose to see the city lights of New York over anything else, well, you made the right decision. NYC is known as the city that never sleeps because of its diverse culture and many entertainment options. […]

The post 5 Hotels on 42nd Street in NYC to Stay At Once in Your Life appeared first on Alex on the Map.

Spending a vacation in New York City is the ultimate dream for many people. With its lively and vibrant atmosphere, famous tourist attractions, and being named as the “city that never sleeps,”...

Where To Stay In Medellin, Colombia

Medellin is the very definition of a success story, having undergone a renaissance that transformed this once infamous city into ...

ContinueWhere To Stay In Medellin, Colombia

The Best Things to Do in Las Vegas – Conversant Traveller

Las Vegas is a city that is known the world over. It has cultivated a reputation as a playground for adults throughout most of...

The post The Best Things to Do in Las Vegas appeared first on Conversant Traveller.

Read more
Get around Guatemala

How to get from Guatemala City to Rio Dulce, Guatemala 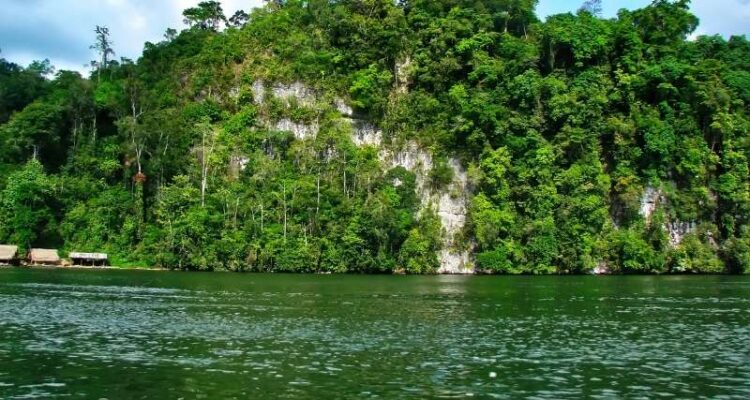 Rio Dulce is a gem for adventure traveler. Check out our guide for the best options to travel from Guatemala City to Rio Dulce. Are you looking for adventures on your trip to Guatemala? Head to Rio Dulce! Rio Dulce National Park is famus for its biodiveristy and wide range of adventure activities. Rent a …
Read more
123...25Page 1 of 25

This is the Time for Impact Health Sharing

Things to Do in Sevierville, Tennessee, Edge of the Smoky Mountains – The Travel 100